Bloomsday and Al Goldstein;Robert Jay Lifton-Witness to an Extreme Century 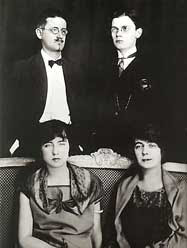 I celebrated Bloomsday(June 16, the day in 1904 that the entire events of Ulysses take place)at Left Bank Books, the fine antiquarian/used bookshop on 8th Ave between Jane and West 12th st.
While numerous readers declaimed from various chapters of Ulysses, when it came my turn, I read sections from the Anna Livia Plurabelle chapter of Finnegan's Wake, wherein Joyce expounds on the great feminine archetype of life-giving waters, the Liffey, and in the course of doing so buries hundreds of hidden names of the world's rivers.
As if this treasonous activity weren't enough, I then proceeded to read from Selected Joyce Letters, a one volume abridgement and selection of new and previously expurgated letters published after the death of Nora Joyce, James Joyce's wife, and edited by Richard Ellmann.
In the course of doing so I explained how I found Joyce through Al Goldstein, the once famous publisher of Screw magazine and first amendment warrior.
The circuitous route went like this: I was just beginning my legal career, doing First amendment work and libel readings, when I saw the cover of the then current issue of Goldstein's sex tabloid Screw, brazenly announce the publication of just published smutty missives from James Joyce to his amour,the Irish actress Nora Barnacle in 1909.
Naturally, Al Goldstein, who was never one to turn down an opportunity to push the boundaries of free expression, took the most juicy letters just published in the Ellmann edition, and sprayed or splayed them all over the pages of his magazine.
My assignment as fledgling attorney was to write the obligatory infringement letter on behalf of Stephen Joyce and the Joyce Estate, it being understood that it was unlikely they would engage in court proceedings.
We did so, and shortly thereafter left for vacation in Afghanistan , India and Nepal( those were the days when one could still safely take one month vacations)
When I came back, numerous people visited me and asked what I was doing with multiple copies of Screw magazine in my desk drawers. I explained that these were potential plaintiff's court exhibits and asked why they had entered my office and were prowling though my desk.
All I got In return was a knowing smile...

Thus I learned two inportant lessons-1- always lock your desk when you leave on vacation and 2- James Joyce, who wrote the steamiest prose I had seen must be worth reading- So I ventured beyond the Portrait of an Artist and Dubliners into the encyclopedic dayworld of Ulysses and night world of Finnegan's Wake and life was never the same...
And it was from one of these letters that I read last week, the one sent on Dec. 16, 1909 which says F*** me in multiple imperative phrases ,each for a different and unusual position,and continues with "Basta basta per Dio -[soon I shall be in] Trieste... I shall be happy there-I figlioli,il fuoco,una buona mangiata, un caffe nero,un Brasil,(the children, a fire, a good dinner, a black coffee, a Brazil cigar)
...A hundred thousand kisses darling!
Jim
It's as hot now as it was `102 years ago...
Posted by moncure at 3:16 PM