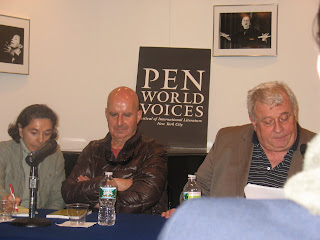 The photo is of the great French novelist Pierre Guyotat, who appeared at several fora at the PEN World Voices festival recently concluded, including the afore-captioned one at Maison Francaise with Edmund White.Guyotat, who is often described,somewhatsimplistically, as the heir to Rimbaud and de Sade, first came to national attention with the publication of Tomb for 5000 Soldiers(Tombeau pour cing cent mille soldats), an obsessively brilliant rant of atrocities in a military zone which evoked the Algerian war.Eden Eden Eden,which followed, was one uninterrupted stream of violent sexual activities/expressions, censored for many years by the French Government.He has proceeded , through Prostitution, printed in French and not here in English except through a brilliant recasting of language in a short piece by Bruce Benderson, to continue to subvert the French language. Coma, reprinted this year in English by Semiotexte, describes his breakdown and recovery as a writer many years ago, and he is now expanding his writing style to a confluence of memoir and language subversion, which makes easier reading for some. An altogether brilliant man and fantastic writer.NB:Red Dust has published the aforementioned Bruce Benderson's unique translation and commentary on Prostitution, which is a marvellous feat of reinvention of vocabulary akin to the translation of Perec's lipogrammatic "A Void',a three hundred page novel in French without the letter "e" brilliantly recreated in English by Gilbert Adair.


BEA 2011 starts this week; we are attending and focussing on these titles, which among others will be reviewed in these pages.(We will also cover and review the state of University Press publishing, the legal ramifications of limited library use of e-books, the state of the market and titles from small independent presses, and the mise en scene in publishing today.

Again, the following are but a few of the more obvious books we will treat in detail- The Prague Cemetery by Umberto Eco, The Exegesis of Philip K. Dick, whose writings are finally getting as much attention in his home country as they have for decades in Europe, The Last Word, Mark Lane's summing up on the Kennedy Assassination from Skyhorse,and new works by Anne Enright,Kenneth Goldsmith, Carlos Franz, JMG Le Clezio, and the titles of Dalkey Archive, North Atlantic Press, Archipelago and a host of others. Off to the races!
Posted by moncure at 5:49 PM