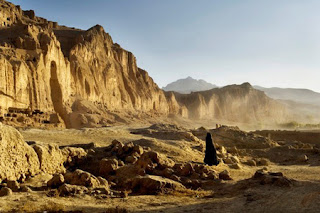 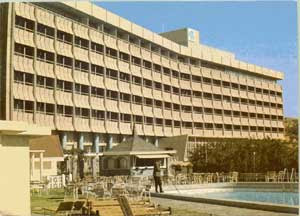 The suicides attacks and fires at the Kabul Intercontinental Hotel inlate June brought back sweet and sour memories of our encounter in 1971, when the hotel was newly opened. We were on a 5 week self- conducted tour of Afghanistan,India and Nepal- the first leg of which encompassed 10 days in Kabul, with trips to Jalalabad(source of much intrigue these days) and the Bamiyan valley , where we were escorted through caves to stand on the top of the legendary Greco-Buddhist Buddhas statues carved out of the cliff- two huge monuments that were a prime attraction for visitors and a reminder of Afghanistan's confluence at the center of many worlds- a crossroads of civilizations(until theTaliban, at the urging of Wahhabis detroyed them before September 11,2001.)


Who can forget that bizarre trip in the early 1970's when the King was still in power and the most dangerous thing to do was to sleep out in the open, and be exposed to bandits and cutthroats.
That first night- in the Spinzar Hotel,we watched the geckos run down the wall ,gazed out at the open stalls still lit; the skies over the thrusting jagged Hindukush peaks were blazing with stars .And then we casually went to the Afghan music room in the hotel, not yet daring to venture out since we had landed just before dark that afternoon and the night and timeless uneasy feeling in the air was just a little bit threatening.In this small upstairs foyer we listened to an Afghan version of the oud played by a young soldier off duty while another Afghan man tried to dance with the newlywed spouse who was wearing a long dress but not a burqa)-
I had to politely cut in to discourage his efforts. But those were the days when the university students were not veiled, nor were the koochi(nomads) and one third of the population seemed to be nomadic.
The last night we were there my lovely wife was just recovering from dysentery encountered at the aforesaid Intercontinental Hotel, where we were assured that the water filling our canteens had been thoroughly distilled and purified.Not! Shortly after returning to the hotel the next day from steaming Jalalabad she felt seriously illand
She remained in bed the last two days we were in Kabul. The last night, after receeiving reassurance from a local Afghan physician, who advised chewing on lemons, she was strong enough to struggle down to the dining room and order tea and bread-
For my part, having been sickened by the smoky smell of aged mutton cooking in the streets(the aroma made fecal matter seem ambrosial)- I told the waiter that I would prefer my own food and proffered a can of Chef Boyardee Ravioli bought from one of the"gourmet" stores on Chicken St-
He replied "you do not like our food sir" and I countered that I was under doctor's orders to eat Chef Boyardeee once a week-(Please remember this is a country where the Pathan code of hospitality,best exemplified by the Taliban's refusal to turn Bin Laden over to the West in 1999 since he was entitled to all the privileges of any other guest) obliges strangers to invite one into their home for dinner ; one does not want to give insult under such delicate circumsytances.
So I gingerly walked into the kitchen,and made the surprised staff remove ten inches of stale oil from an iron pot that looked as if it were minted at the time of Timerlane- and that was the best meal we had in Kabul...
We never made it back to Afghhanistan, despite plans to visit Mazar-I- Sharif, but if one wishes to read a great work of literature and crazed travel writing, Rory Stewart's The In Between Spaces, an account of his winter's journey by foot after 2001 from Herat to Kabul over the Hindukush, is one of the most compelling solo travel accounts of all time.