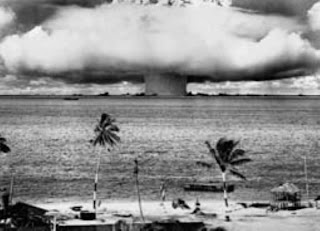 Robert Jay Lifton, now in his 80's, has graced us with numerous works of psychology and history focusing on some of the more extreme traumas and events of our 20th century past- from thought reform and brainwashing by the Chinese, to the hibakusha-the survivors of Hiroshima and Nagasaki and the meaning of living through a nuclear holocaust- to the way that the Nazi doctors were able to reconcile their respective Hippocratic oaths with carrying out torture and horrible medical experimentation on concentration camp victims.The discussion of how Nazi doctors and others make use of a kind of psychic numbing or mental separation from the horrible acts one is contemplating or engaging in, is as startling today as when I first encountered it thirty years ago in Lifton's writing. As is Lifton's poignant and brilliant mosaic of the horrors of the bomb and living in its aftermath. The descriptions of how a city like Hiroshima was literally wiped out of existence in a few instants are alone worth the price of admission to these pages.
These canvasses as well as the Vietnam war are covered in a detailed moral memoir of an engaged life that has just been published as Witness to an Extreme Century by the Free Press. Lifton was both an analyst and activist on many of these issues and has written on the protean man- always changing attitudes and consciousness, cults like Aum Shinryiko in Japan and numerous topics dealing with history and matters of human survival.
What stands out for me is his perceptive analysis of what he calls "totalism"-a totalistic mental environment in which "eight deadly sins" are present-

1-milieu control of virtually all communication in the environment
2-mystical manipulation from un uncertain source above
-3 the demand for an absolute purity of good to defeat an absoolute evil
4-the cult of self-confession(eg inChina)
5-sacred science,meaning claims for doctrinal truth that is divine and scientifically "proven"
6-loading the language--
7- doctrine taking precedence over person,with doubt considered as an aberration or personal flaw- and
8-dispensing of existence/and or the right to live between those who have a right to existence and others who ,unfortunately do not.

In this approach to totalism is much of fundamentalism , claims for national exceptionalism and superiority, cult behavior,and other aspects of authoritarian and doubtless minds.

This is one of the most important memoirs I have ever read.Cool, level headed and with some optimism too for the survival of our species, despite the ugliness of the last 100 years.

The photo above of the mushroom cloud is of Bikini atoll in the Pacific where the US conducted above ground nuclear tests right after World War II and allowed military photographers to view the explosion from less than a mile away.
Posted by moncure at 1:47 PM