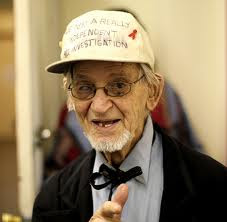 Little did I know, when I was stopped three weeks ago in a cab across 35th st for a light, that the nonagenarian panhandler with the hat emblazoned with Remove our Corrupt Government and Uncle Sam is A Bully on its brim - would turn out to be,according to today's NY Times,Irwin Corey, the 97 year old comic actor and master of doubletalk, who raises money for progressive causes in his free time and who lives nearby in a $3.5 million dollar carriagehouse. ( His wife recently passed away at 95).
I did contribute to his cause- and in exchange he ceremoniously passed me a copy of a newspaper, which I stuffed into my bag of lunch books and upon returning to my office before the witching hour of 2pm gingerly took out, hoping it would contain the prophetic ravings of the esoteric underground-
It turned out to be the Voice, and I kept it as a souvenir because it seemed a special,magical encounter.

Here is Professor Corey' famous doubletalk speech at the National Book Awards in 1974, accepting the award for Gravity's Rainbow and as authorized by Thomas Pynchon:

Professor Irwin Corey:
However... accept this financial stipulation - ah - stipend in behalf of, uh, Richard Python for the great contribution and to quote from some of the missiles which he has contributed...Today we must all be aware that protocol takes precedence over procedure. Howewer you say - WHAT THE - what does this mean... in relation to the tabulation whereby we must once again realize that the great fiction story is now being rehearsed before our very eyes, in the Nixon administration... indicating that only an American writer can receive...the award for fction, unlike Solzinitski whose fiction doesn't hold water. Comrades - friends, we are gathered here not only to accept in behalf of one recluse - one who has found that the world in itself which seems to be a time not of the toad - to quote even Studs TurKAL. And many people ask "Who are Studs TurKAL?" It's not "Who are Studs TurKAL?" it's "Who am Studs TurKAL?" This in itself as an edifice of the great glory that has gone beyond, and the intuitive feeling of the American people, based on the assumption that the intelligence not only as Mencken once said, "He who underestimates the American pubic - public, will not go broke." This is merely a small indication of this vast throng gathered here to once again behold and to perceive that which has gone behind and to that which might go forward into the future...we've got to hurdle these obstacles. This is the main deterrent upon which we have gathered our strength and all the others who say, "What the hell did that get?" - We don't know. We've got to peforce withold the loving boy... And as Miller once said in one of his great novels- what did he ... that language is only necessary when communication is endangered. And you sit there bewildered, and Pinter who went further said "It is not the lack of communication but fear of communication." That's what the Goddamn thing is it's we fear - communication. Oh - fortunately the prize has only been given to authors - unlike the Academy Award which is given to a female and a male, indicating the derision of the human specie - God damn it! But we have no paranoia, and Mr. Pynchon has attained, and has created for himself serenity, and it is only the insanity that has kept him alive in his paranoia. We speak of the organ...of the orgasm...Who the hell wrote this? And the jury has determined to divide the prize between two writers - to Thomas Pynchon for his GRAVITY'S RAINBOW. Now GRAVITY'S RAINBOW is a token of this man's genius...he told me so himself...that he could...in other words, have been more specific, but rather than to allude the mundane, he has come to the conclusion that brevity is the importance of our shallow existence. God damn. Ladies and Gentlemen. To the distinguished panel on the, on the dais and to the other winners, for poetry and religion and science. The time will come when religion will outlive its usefulness. Marx, Groucho Marx, once said that religion is the opiate of the people. I say that when religion outlives its usefulness, then opium...will be the opiate...Ahh that's not a bad idea... All right...However, I want to thank Mr. Guinzburg, Tom Guinzburg of the Viking Press, who has made it possible for you people to be here this evening to enjoy the Friction Citation - the Fiction Citation. GRAVITY'S RAINBOW - a small contribution to a certain degree, since there are over three and a half billion people in the world today. 218 of them ... million live in the United States which is a very, very small amount compared to those that are dying elsewhere...Well, I say that you will be on the road to new horizons, for we who live in a society where sex is a commodity and a politician can become a TV personality, it's not easy to conform if you have any morality...I, I, I said that myself many years ago...But I do want to thank the bureau...I mean the committee, the organization for the $10,000 they've given out...tonight they made over $400,000 and I think that I have another appointment. I would like to stay here, but for the sake of brevity I, I must leave. I do want to thank you, I want to thank Mr. TurKAL. I want to thank Mr. Knopf who just ran through the auditorium* and I want to thank Breshnev, Kissinger - acting President of the Unites States - and also want to thank Truman Capote and thank you.

New York City still is a special place to work- even in the middle of midtown , clogged with mallstores.bike lanes and superrich detritus. A good nose ferrets out the jewels.
Posted by moncure at 5:25 AM