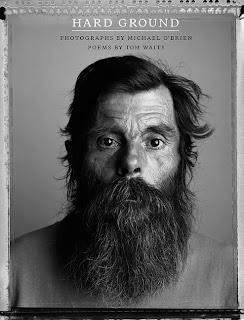 Here is the blurb from the University of Texas Press about this book:
Michael O'Brien got out of his car one day in 1975 and sought the acquaintance of a man named John Madden who lived under an overpass. Their initial contact grew into a friendship that O'Brien chronicled for the Miami News, where he began his career as a staff photographer. O'Brien's photo essays conveyed empathy for the homeless and the disenfranchised and won two Robert F. Kennedy Journalism Awards. In 2006, O'Brien reconnected with the issue of homelessness and learned the problem has grown exponentially since the 1970s, with as many as 3.5 million adults and children in America experiencing homelessness at some point in any given year.

In Hard Ground, O'Brien joins with renowned singer-songwriter Tom Waits, described by the New York Times as "the poet of outcasts," to create a portrait of homelessness that impels us to look into the eyes of people who live "on the hard ground" and recognize our common humanity. For Waits, who has spent decades writing about outsiders, this subject is familiar territory. Combining their formidable talents in photography and poetry, O'Brien and Waits have crafted a work in the spirit of Let Us Now Praise Famous Men, in which James Agee's text and Walker Evans's photographs were "coequal, mutually independent, and fully collaborative" elements. Letting words and images communicate on their own terms, rather than merely illustrate each other, Hard Ground transcends documentary and presents independent, yet powerfully complementary views of the trials of homelessness and the resilience of people who survive on the streets


And it's totally accurate- when you read the gritty poetry of Waits, in juxtaposition to the faces and the stories of the increasingly large number of homeless people in America,many of whom thrown out of homes by disastrous health situations,it almost makes a sham out of speeches like the one delivered in Tucson by our great orator President, for this is a country that,notwithstanding its tremendous wealth, and even with the decline from unitary superpower, still has the capacity to offer basic social protection to those less fortunate than others, but turns its back on them and on their dreams,while granting virtually every last wish of those of mega-Mammon status.
Posted by moncure at 2:30 PM