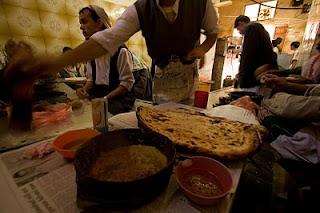 The news of the revolt in Egypt and Yemen makes it timely to repost this piece on dangerous dining in Sana - the capital.


Sometimes the greatest culinary surprises are buried deep in our literature. Thus, for example in the 1991 travel adventure Motoring with Mohammed by Eric Hansen, a fine essayist and writer of whimsical travel a la Eric Newby and Redmond O' Hanlon,we find the author shipwrecked off the coast of Yemen. Rescued by the Yemeni military on Groundhog Day 1978, he and his group of sailing compadres are brought to the capital, Sa'na,an ancient city with fine mud-brick tower houses that dot the skyline and convey along with the many delicate minarets the aura of Scheherezade. There in the country reputed to be once the home of the legendary Queen of Sheba, he stays with an American Peace Corps worker, who recommends to him at his specific request an authentic Yemeni restaurant not frequented by tourists.(How many times have we naively made the same request ?)
We next find him waiting in line to enter an underground eatery with no name displayed, being borne up by the surging crowd in the air and pressed down the "foot-worn" stone steps to enter an inferno of hot earthen ovens--There he is forced to climb over the tables one after another to reach an open chair and winds up being wedged between two quite heavily armed men.They proceed to instruct him in the fine art of attracting the waiter's attention by hitting him with moistened spitballs made from their napkins. (I would love to do this in French Laundry or Taillevent in Paris(and who could object, surely not the French poodles perched under the tables)-it alone would be worth the cost of the meal although in the Oyster Bar in New York it might take a very long toss, with the significant air resistance entering into the calculus )

He then strikes the waiter in the shoulders with some precisely thrown overheads, and orders Salah, a highly spiced potato, garlic, and mutton stew, covered in a frothy sauce called bulba made from whipped fenugreek paste and served in an earthenware pot so hot it leaves scar marks on the table.

And of course it is delicious.Eating with his fingers and energized by the chilis, the author pays the bill and leaves the restaurant in an opium-like daze.

Now that is the kind of dining experience even those of us who have taken far-flung journeys dream about!It's the perfect wave -that once in a lifetime experience of dangerous and delicious dining,from which, even within the constraints of that dreaded word "tourism" you emerge presumably alive with your adrenalin and gastric juices in free flow.
For me, this evoked memories of a trip 30 years ago to the famous Moti Mahal restaurant in Old Delhi, where you trace your steps down narrow alleyways to a step down raffish joint with what was considered by many India's best tandoor cooking. The butter chicken there still melts on my tongue, and it was predictable many years later when the chef was cajoled to go to London to open a well-financed "branch" in Covent Garden that the inevitable comparisons would be made-
I sampled the cuisine in this upscale dining establishment on a recent trip to London
It was quite tasty, subtle, well prepared but lacked the touch of brilliance of the original-
What is it about underground restaurants- are they close to the axis of the world- do they draw sustenance from the roots of the tree of life so that when they cook their pungent specialities one remembers them for a lifetime.


JOHN ROSS OBIT
John Ross, the radical poet and independent news writer, author and intimate of the Zapatistas, who wrote several early books on the movement, has died at 72 of liver cancer in mexico where he spent most of his time(other than his beloved Mission District in Sf), and where he wrote ElMonstruo- a kaleidoscopic history of Mexico City .(he moved there in the early 80's a day or so after the big earthquake) I met him twice, the first time on the occasion of his publishing that entertaining wild text"Murdered by Capitalism" blurbed by Thomas Pynchon, a great on the streets history of various left wing movements in the US. John was an inspiring, no nonsense ex "Red Diaper" baby from NY's Upper West Side, who has seen it all and who never pulled a punch.Ross brought together in his own lifetime the 30's radicals, SDS and the 60's rebellious as well the anti-globalist movement, in addition to his involvement with the Zapatistas.

On the barricades, a thorn in the side of authoritarians, he cut quite a figure with his bedraggled beard and much worn clothes- From the mission blog:

"In his later years, even as he struggled with cancer, Ross always woke at 7:30 a.m., according to his friends. He continued with a U.S. tour for his last book, El Monstruo. When here, he was known for walking around the Mission with his distinctive cane and black and white scarf, and going to Café La Boheme on 24th Street each morning for a double short latté, according to the café. “He was almost deaf in one ear, and had one eye gone,” said Bell. “He had an imitation eye that sometimes popped out.”

That eye was allegedly harmed in a fight with San Francisco police in 1967. The fight, Bay Guardian Executive Editor Tim Redmond said, broke out when Ross tried running for a spot on the Board of Supervisors. Afterward, he was removed from the ballot because of his felony conviction for resisting the draft. Later on, The Guardian, his employer, held a fundraiser and poetry reading at Café La Boheme to purchase the glass eye for Ross.

“He was one of the most amazing writers I ever worked with,” said Redmond. Ross walked into the Bay Guardian looking for a job in 1984 after “the campaign against marijuana planting raided his house [in Arcata] and destroyed all his stuff,” he said. All Ross had were his “clothes and a few bags of marijuana in his backpack.”

“Everyone knew he smoked marijuana morning, noon and night,” said Bell. “He totally disproved that pot ruins your memory, because he was razor sharp. He could tell you the middle name of a lawyer who worked on some random case in 1971,” she said."

Goodbye Dear John- voice of truth- always in the face of authority, the highest goal of journalism -R.I.P.
Posted by moncure at 6:25 AM